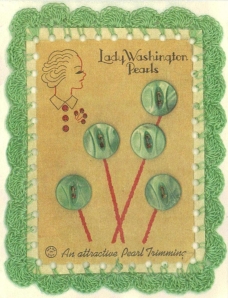 This vintage button card was crocheted by Tamara Gonzales. She created it for her sister, Jackie Clark to use as note cards and thank you’s. I have had the priveledge of working for Jackie for several months now. The button card was a hit at the quilt market she and her sister had just returned from when I began working for her. It was fun to read on other blogs the response that people had to them. The real deal is special, the copied note cards are quaint. I love the idea. I crocheted around paper heart shaped doilies this Valentine’s Day because I was dying to try this but could think of nothing I could add to it’s already perfected cuteness.
I said I was a lucky gal. I am. I had lunch today with Tamara and Rosina, a memeber of Tamara’s crochet guild that she is the president of. We met at a wonderful french cafe downtown and had a fabulous meal getting acquainted and discussing the crochet guild. I told you someone would buy me lunch, today it was Tamara and what a generous thing to offer, what a wonderful gift.
I have known Jackie and Tamara for about 15 years now. Knowing – meaning our paths keep crossing. I used to shop at Jackie’s resale clothing store for baby clothes for my daughter. As you can imagine, it was a wonderful boutique. I was young and a new mom and Jackie looked like she knew what she was doing, she made being a shop owner look easy. I couldn’t wait to try it one day. I did, about seven years later. That’s when I got to know Tamara, she shopped in my consignment store and I would ask about Jackie. My husband and Jackie’s husband work at Cessna and so every Christmas when the company party rolled around, I knew I could sit and find out the scoop and see what Jackie was doing. Imagine my surprise when she began to tell me about her pattern business and that it had begun to really take off and grow. Little did I know what she and Tamara had already been doing. I had since closed my shop and found my health was limiting what I felt I could do in the decorating world. Jackie invited me to see what she was doing, she knew I liked computers and that maybe I could help with her growth spurt. My mind hasn’t stopped spinning since she introduced me to her business, her ideas, her concept and her team.
I told her early on in the game that she had always been a hero to me. Maybe she thought I was sucking up. I know she was being modest. Hero is a big word. But often we assign big characteristics to our heros. To me being a hero is being kind, being positive, being a contributor, being graceful, being bold, being true to who you are, setting an example and when someone asks you, how did you do that, giving them encouragement to try. Simple, yet so hard.
Today I am lucky, today I had lunch with Tamara and Rosina and they treated me like a lost old freind. We laughed and I was inspired and excited to be included in working on a project for the crochet guild decorating the window for a wonderful yarn shop, Twist that is graciously hosting their meetings. What decorator girl doesn’t want to do a window? What girl doesn’t want to have lunch with friends and laugh. Today I have two more friends than I did last week because someone was thinking of me and suggested I might enjoy taking a crochet class from a really good teacher. Sisters are a great thing. Thank you for so many, many things, my friends.
The hitch in my giddy-up came when I was sitting in the kitchen telling my husband about my fun day and I noticed that there was a strange piece of tape on the front of my shirt. I wondered how it got there. I was talking and pulling and questioning out loud and my husband began to laugh.. “It’s the size sticker, you forgot to pull it off you goof!”, “Yeah, let me decorate the window, I’m so detail oriented..” we cackled and laughed. He says he loves me, how lucky can you get?